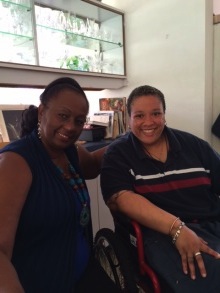 Kerensa’s life changed completely in September 2007 when she became a T4 paraplegic as a result of a car accident. She returned home to Trinidad two years earlier, after an almost ten year hiatus in Miami, where she attained Bachelors and Masters Degrees while working full time through both.

On the fateful morning of September 30, 2007 while driving her car with a friend from San Fernando to San Juan a horrific vehicular accident left Kerensa consciousness for 3 days, and with no immediate memory of the event. Kerensa had suffered massive head injuries, broken bones in her neck, a broken collarbone, broken spine, and fractured ribs, and spent the next 7 months at Mt Hope Medical Sciences Complex, the first 3 months immobilized in a chest brace.

After numerous surgeries she was discharged and informed that she would “….. not walk again…..”.

Fast forward to February 2009 barely able to offset the cost of surgery to ‘correct’ her friend’s collarbone injury, Kerensa’s medical bills had mounted beyond her financial management.

Kerensa requires nursing care, medical equipment and supplies, all funds have been exhausted and she receives Public Assistance of TT $850 monthly, as the only assistance for which she is eligible.

Needless to say her situation is dire and her survival is dependent on random goodwill donations.

In spite of the calamity that has befallen this young woman she remains highly spirited and grateful for her life, the blessings, love and support she has received in all their “….many shapes and forms…..”

Kerensa’s aspiration is to return to gainful employment.

WAND embraces Kerensa’s fortitude, her gratitude and hope; we have begun to solicit support and donations for Kerensa’s immediate medical needs and other mechanisms to help her return to gainful employment.

Kerensa’s still requires financial support to cover the cost of her day-to-day medical needs and we are appealing to progressive employers to contact WAND and join us in giving Kerensa a ‘hand-up’.